Last weekend, music lovers in the Geelong region, and a few from wider afield, partook of a feast of music.

This was the 9th Festival of Sacred Music in Geelong’s Historic Churches presented by Music at the Basilica.
The festival director is Frank De Rosso, who, along with the hard working committee at Music at the Basilica deserve congratulations for this fine weekend of music.

The opening concert, From Harmony to Harmony, featured the Windfire Choir and Chamber Ensemble, conducted by Rick Prakhoff.  The title comes from John Dryden’s ode A Song for Saint Cecilia’s Day which was presented by the choir and orchestra in a setting for by Handel written in 1739.

Handel’s 1739 Ode for Saint Cecilia’s Day was the second part of the concert.  The chamber orchestra, led by Philip Healey, included strings, harpsichord and organ (played by the agile Beverly Phillips) and theorbo and lute played by Rosemary Hodgsen, as well as trumpets – with splendid playing by Tristan Rebien, oboes and flute.  The vocal soloists were Sally Wilson and Robert Macfarlane.

This ode, though less well known than Handel’s music for Dryden’s other ode Alexander’s Feast, includes some beautiful word painting, with solo instruments illustrating the text.

It is unusual in this era to feature solo cello and soprano.  Handel’s setting of What Passion Cannot Music Raise and Swell begins with a long cello solo, sensitively played by Jeanette Carnie.  Sally Wilson took up the text with a wonderful sense of phrasing and clear line.  The soft complaining flute features the more common, but no less beautiful combination of flute and soprano.  The soprano echoes the sobbing sadness of the flute melody.  The flute was played by Brigid Mantelli.

Unfortunately, the organ used in this setting was electronic and without the power to do full justice to   ‘But oh! what art can teach… the sacred organ’s praise’.  Notwithstanding this, the sustained chords and long lines of the soprano solo, provided a satisfying performance.

Tenor and choir both feature in The Trumpet’s Loud Clangor.   The martial rising arpeggios of the trumpet heighten excitement.  Timpani adds to the tension.  Tenor soloist Robert MacFarlane sang the opening rising phrase ‘The trumpet’s loud clangor excites us to arms’ with effortless deftness.  Later the tenor is echoed by the choir – ‘Hark the foe comes’ then ‘Charge, ’tis too late to retreat’.

In the last movement As From the Power of Sacred Lays the trumpet heralds the end – when the music of the spheres overcome the earthly.  In the martial key of D major, the choir and soprano exultantly sing, in partnership with orchestra coloured by trumpets and timpani, ‘The trumpet shall be heard on high, and music shall untune the sky’.

Read a review by Wendy Galloway of this concert at https://musicatthebasilica.org.au/wp-content/uploads/2017/05/Ninth-Festival-review..pdf 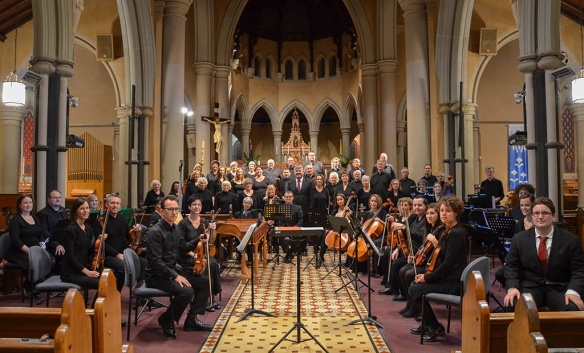 Saturday’s festivities began with two workshops.  The first was Running with Zithers presented by Angelika Smales.  Angelika Smales’ endeavour was to prove that anyone can learn to play the zither in only one hour.

The second workshop, presented by John Weretka, demystified the diverse history of the chant.  In Laudes Deo:  An introduction to chant, John Weretka explained that, although modern chant liturgy has Gregorian chant as its basis, in earlier times liturgical rites, and the chants that underpinned them were diverse, and usually specific to particular areas in Europe and the British Isles.  The usage of most of these rites is now extinguished, usurped by the Gregorian tradition, with only a few traces remaining in very localised areas.  John Weretka showing examples of early notation of chants and demonstrated how they would have been interpreted.  He stressed that most of the chants were learned by rote and repetition, rather than singers reading from manuscript.

This talk helped inform patrons attending Crux Fidelis, presented by six voice vocal ensemble e21 as part of Sunday’s program.  e21, directed by Stephen Grant,  presented plainsong chant.  The chants included in the festival program covered Gregorian, Ambrosian and Old Roman chant, each with its specific characteristics and ornamentation.  The unison singing of the whole group was superb, as were the solo voices, who presented verses in some of the chants.  With the exception of two works in two parts (Virgin Mariae laudes and Conductur: Codex Engelberg 314 – Unicornus captivator) all works were in unison.  John Weretka, who had conducted the Saturday chant workshop, demonstrated an early hurdy gurdy, which was used to provide a drone in one piece.  (The hurdy gurdy is a very early mechanical instrument, where the player turns a handle, which activates the turning of a wheel against a string.)

The setting of St Mary’s Basilica was perfect for this early music.

On Saturday afternoon Vocal Dimensions Wangaratta presented Sing Praises, a program of choral sacred music.  The group is directed by Malcolm Halford with Margaret Phillips accompanist.  The music ranged across the traditional choral repertoire from Byrd’s Ave Verum Corpus and Victoria’s O Magnum Mysterium through the classical and romantic music of Haydn’s The Heavens are Telling and Brahm’s How Lovely is Thy Dwelling Place to Faure’s Cantique de Jean Racine,and Charles Wood’s O Thou the Central Orb to music of the 20th and 21st centuries.

Eight sopranos and five altos were well balanced by the four basses and two tenors.  The blend was excellent.  The choir coped well with the dissonances in John Taverner’s The Lamb, and the sustained line in the Benedictus and Agnus Dei from Karl Jenkins The Armed Man. The concert concluded with Ralph Vaughan Williams jubilant Let all the World in Every Corner Sing (No. 5 from Five Mystical Songs).

For listeners with an Anglican background in choral music, this program was a most satisfying trip down memory lane.

Saturday’s festival program concluded with a concert by internationally acclaimed organist, Thomas Heywood.  This was held at St Paul’s Anglican Church.  The program included music from the seventeenth to the twentieth century, and included a number of pieces transcribed for organ, including the final piece, the exciting and frenetic Finale – Allegro con fuoco from Dvorak’s Symphony No. 9 in E minor – “From the New World”, Op. 95.

Sunday’s program began with a celebration of Mass at St Mary’s Basilica.  The choir of St Mary of the Angels presented Missa in Honorem St Ceciliae, by Joseph Gruber, and Haec Dies (Psalm 118:1) by Healey Willan.

The final concert of this year’s Festival of Sacred Music in Geelong’s Historic Churches was Song of Songs presented by Ensemble 642.  Hannah Lane (Italian triple harp) and Nicholas Pollock (theorbo) were joined by guest artist soprano Roberta Diamond.  The program comprised sixteenth and seventeenth settings of verses from The Song of Songs and several instrumental pieces for duet or solo.  Roberta Diamond specialises in the interpretation of renaissance and baroque music, and showed phenomenal vocal technique, interpreting this florid and sensual music.

All three musician are masters of their instruments.  The ensemble created by three musicians, completely attuned, was spellbinding.

This concert dove-tailed perfectly with the unison chant of the earlier concert by e21 – showing a development of sacred music from unison to harmony.

The concert ended the weekend of beautiful music making on a sublime note.

Next year marks the tenth year of The Festival of Sacred Music in Geelong’s Historic Churches.