A concert to acknowledge the centenary of the WWI Armistice and to commemorate the sacrifice made by many in all wars.

This concert to mark the end of the “War to end all Wars” began with poet Siegfried Sassoon’s short poem Aftermath which was read with simplicity and dignity by Tim Gibson.  Sassoon reminds us of the horrors of war and asks ‘Have you forgotten yet?’  The fact of today’s concert, and other events and concerts marking the armistice that ended World War I, show that Australians have not forgotten.  Sassoon, a recipient of the Military Cross, took a stand against the war – not the first or last soldier to elucidate the futility of war and devastation it causes.

The Geelong Chorale, conducted by Allister Cox, then sang Lest We Forget composed this year by Australian Matthew Orlovich.  The work is for soprano soloist, choir, clarinet and piano.  Fiona Squires’ beautiful soprano soared above the choir and piano, with an ascending scale enunciating the words of the Lux Aeterna from the Requiem Mass.  The work is punctuated with the chant Lest we Forget which interweaving clarinet and piano lines.  The music’s end is marked by an expiration of breath from the choir – like the last gasp of a dying soldier.  The talented clarinet soloist was Jess Morris, and the choir’s regular and most accomplished accompanist, Kristine Mellens, was the pianist.

The sombre mood continued with the poem Anthem for Doomed Youth by Wilfred Owen, another poet of WWI.  Imagery like ‘The shrill, demented choirs of wailing shells’ shows some of the horrors of this war which killed many millions of people, and wounded countless more, leaving whole nations in mourning.

Edward Elgar’s longer work, For the Fallen from The Spirit of England, op. 80, completed the first half of the concert.  The poem, written in 1914 by Lawrence Binyon, though written without the first hand experience of the front line of Sassoon and Owens, contains some of the best known words to commemorate the war dead –

Age shall not weary them, not the years condemn

At the going down of the sun and in the morning

We will remember them.

The music, for choir, tenor soloist, piano was completed in 1916.  It begins with a steady slow marching beat from the bass notes of the piano, before a more romantic section which heralds the entrance of the choir alternating unison and harmony.  The music rises in intensity and pitch heralding the soloist’s entry – ‘Death, august and royal/Sings sorrow unto immortal spheres’ – a much more glorified view of war’s destruction than the stark reality of Sassoon or Owen.  The work is dedicated “to the memory of our glorious men, with a special thought for the Worcesters”.[1]  Nevertheless, this moving work honours the heroes of war, and was written in a time of bleakness to strengthen the resolve of the people of Britain.  The Geelong Chorale’s performance showed a choral richness, with the choir demonstrating once again a beauty of tone in the gentle passages – none more than in the unison last line ‘to the end…’  David Campbell’s fine clear tenor and faultless diction cut through the choral texture and shone out in the solo sections.

Mess de la Déliverance was composed in 1918 by Théodore Dubois to give thanks for the end of WWI.  It is dedicated to the bishop and choirs of Orleans.  In this performance, this extended work for tenor and baritone soloists and choir, was accompanied on the fine organ of St Paul’s church, played by Beverley Philips.  The work begins with an Introit, a stirring setting of Psalm 150, which makes the most of the brass stops of the organ.  The traditional movements of the Latin mass follow.  This music is lusciously romantic with a wide range of vocal colour and emotion.  The soloists were David Campbell and Manfred Pohlenz.

The final poem of the concert, To Germany, was written by Charles Hamilton Sorley, who was killed by a sniper’s bullet at the Battle of Loos at the age of 20.  In it, Sorley does not allocate blame, but states that ‘the blind fight the blind’, and hopes that with peace, vision of each other’s humanity will return, ‘But until peace, the storm, The darkness and the thunder and the rain.’

The concert ended with God Shall Wipe Away All Tears the final chorale from Karl Jenkins’ The Armed Man: A Mass for Peace, composed to mark the Millennium.

A large audience showed appreciation for this moving concert which was a fitting tribute to those who fight and fall in war. 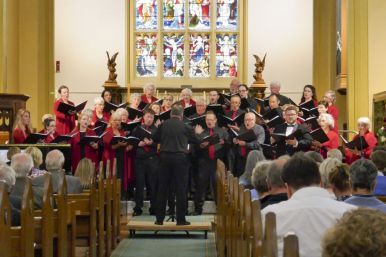 The Geelong Chorale’s final concert for 2018 is CAROLS AT QUEENSCLIFF, on Saturday, December 8th at 5pm, at Queenscliff Uniting Church.