Basilica of St Mary of the Angels, Geelong 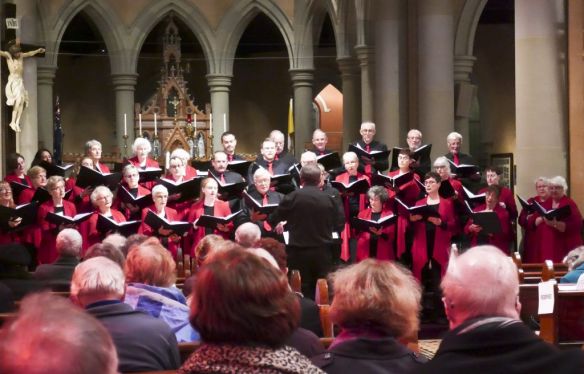 The opening work Entrat Festiva, for brass quartet and organ, by 20th century composer Flor Peters, was presented from the choir loft, with Frank De Rosso playing the organ.  A more fitting work to open the festival could not be imagined.  The music is exciting, joyful and loud, setting the whole church ringing.

Festival Director, Frank De Rosso, is a master at using the spaces available in St Mary’s so that performers are heard to best advantage.  This means that sometimes performers are not seen, but this is in the long tradition of music in churches, where often, as at St Mary’s, organs and musicians we placed out of the congregation’s sight, and choirs often placed behind screens.

St Mary’s has an semicircular gallery behind the high altar, separated from the chancel by a marble colonnade. This space was chosen for the second work – Cantite tuba in Sion (Sound the trumpets in Sion).  The acoustic was perfect for the choir, with the lines perfectly blended in weaving counterpoint.

The choir then moved to a space behind the main altar, now in view, for Pater Noster, by Francisco Guerro, for choir and brass, along with the brass.  It is easy for brass instruments to overshadow voices, and this was somewhat the case for this work, as the choir was still masked by columns and the main altar.

This was followed by three works for choir along, Sicut Servus/Sitvit anima mea by Palestrina and Exultate Deo, by Scarlatti. The last is a most exciting celebratory work, with a fast “Jubilate” middle section (taken by the Chorale at lightning speed) and finishing with joyful Alleluias.

Positioned in a transept, the brass quartet played Canzona a 4 by Giovanni Gabrielli.

The choir were finally in full view – standing on the chancel steps.  The sound was also more balanced between choir and brass, for a performance of Hans Hassler’s Missa Octo Voci .  The brass played one of the 4-part ‘choir’ parts, the Chorale the other.  A feature was the antiphony – with one choir singing alone, followed by the other, and then both together, giving a rich texture and full sound.  The Chorale demonstrated a sure line, and clean polyphony.  There was also a good balance between parts, despite the numerical lack of basses and tenors.

A haunting melody played by solo horn began the second half of the concert.  It was the opening of Easter Moon, by contemporary Melbourne composer, Christopher Wilcock.  began the second half.  The choir entry was a chant, mainly unison, building from piano then crescendoing to blossom into harmony.  The pattern continued, trombone solo followed by voices, trumpet duet followed by voices.  Finally the haunting strains of the horn died away to silence.

In honour of the setting, St Mary’s, three settings of Ave Maria followed, by Bruckner, Franz Beibl and Morten Lauridsen.  The second of these includes brass, the other two are for choir alone.

The brass returned to the choir loft to play Grand Choeur Dialogue by Eugene Gigout – a spectacular piece for organ and brass.  Finally, the choir joined them, in a very early and florid setting of Now Thanks We All Our God by Johann Bachelbel.

The Geelong Chorale has rarely been heard to better advantage.  They choir appeared to revel in this difficult music.

The collaboration with brass on such joyful music made a perfect opening concert for this year’s Windfire Festival – the 11th.  This year’s festival runs across three weekends, and includes eight concerts in various venues, four weekday lunchtime “Organ Plus 1” recitals, an afternoon tea (with music) for Mother’s Day and a workshop.  For more information go to Music at the Basilica.

The Geelong Chorale presents its next concert on Sunday August 18th, with a program of music from opera and operetta.